I trust everyone made it to 2010 and the holidays were epic? Good. I want to wish everyone a very Happy New Year and over the past couple of years you guys have been sunshine in a box. I love everything about you guys. Now, onto the year in review how I saw it.

I think 2009 has led me down some unusual paths when it comes to my recreational TV viewing. To be honest, I really had an open mind and when old ALF episodes were not cutting the mustard I had no choice to cruise the open digital waves of Turner Cable. Here were/are my shows of choice.

Man vs Food has been a must see program every Wednesday and Friday night. I watch this with a sense of awe and amusement as Adam Richman tackles some of the most daunting eating challenges the restaurants of America have to offer. This guy eats wings so hot, they have to be handled with latex gloves and can devour a pizza the size of Oprah’s ass. (she muffin huffs) But the one thing I love is the witty commentary. I would totally help this guy eat the biggest burger or 30 sandwiches. Even if it means yarfing all over the sidewalk on national TV.

Ghost Adventures has taken the slot that I reserved for Ghost Hunters. Partly because this show is far more entertaining and over all creepy. It is that simple. The other part is Zak Bagans is a strange fellow and his seemingly bipolar disposition makes me laugh and there is no better combination than funny-scary. Well, maybe chocolate-peanutbutter. Any way, it is far better to watch than that vagima (spelled it right) Steve on Ghost Hunters. That guy makes me want to air punch until I connect with an innocent bystander. 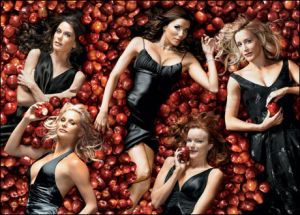 Desperate Housewives? Yeah. So? I like the show. It is witty and keeps you guessing and I always root for Orson because I like the name. That is all I have to say about that. Are you going to take away man points now? At least I don’t like the show that follows; Brothers and Sisters. Now that is a fucking stool sample. It’s a good thing I don’t own a firearm because the TV would be shot any given Sunday night when Alley McBeall and Sally Fields shared a scene.

This past year has not been too bad for films. I live in a small world that believes just about any movie that comes from Hollywood has to suck because creativity went out the window years ago. There has been, however, a few that I will give a tip of the hat to.

A surprise to say the least. I like Quentin Tarantino movies but at times his “shock” value is a little too much for me. Seeing brains and blood for two hours gets old and pedantic. Especially if you have witnessed it in real life. Quentin doesn’t seem like the type to have ever seen anything real like that before. Where was I going? Ah yeah! So I liked this movie. Especially the “Hangman” Nazi. Not that I like Nazis but his character was chilling. I dig that. The “Bear Jew” played by Eli Roth, however, was a drag. I just think Eli sucks. His movies suck, his acting sucks and above all else, his voice makes me Pissy McPissface Meanbean. B minus.

What can I say? I know Paranormal Activity was from 2007 but it hit 2009 like Mike Tyson hit his wife. Knock Out. But that’s not funny. (heeeeheee)

I think this guy below does it the most justice. Actually, just watching his reviews makes me not want to review movies again because he covers all the bases to the T. Please watch. 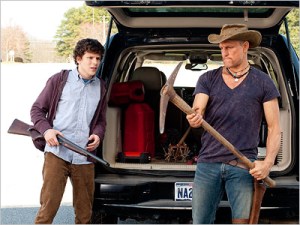 I love anything Zombie. Wether it is a Romero political and cultural platform or just a blood and guts scare, nothing makes me more frightened than being eaten alive by a rotten corpse. Or maybe just bitten and knowing that soon I will be eating people. Whatever. So Zombieland added a touch of fun to my deep dark fears, and that is really appreciated. Now if they can only make a funny shark attack movie. Hrmmmm. Oh, and the famous cameo added so much to the movie.

I can’t believe I saw this. Really, I can’t believe I did. Maybe it was the little notion that Heigl was not like her Greys  Anatomy character in Knocked Up and I though she might be able to be good once again. I was wrong. And I should have seen that coming when her co-star is Gerard Butler. That guy makes my fists itch. Here is what I would rather do than ever be exposed to anything these two do again.

I saw it and enjoyed it. Especially the new 3D technology which makes this movie more of an experience rather than just a movie. But really, this film was a Dances With Wolves, Aliens and some other movie plot. Soooo, I guess it is worth seeing once. And bring a butt pillow because this film is longer than a Catholic wedding.

I think I am passing on talking about Terminator Salvation and Transformers 2. I might make enemies of the die hard fans. Star Trek was pretty cool though. Those are the fans you need to be wary of.

We got a new president and I actually voted the guy. As a vet I think I may have been in the minority. The only reason I did was because I felt a change would bring a sense of calmness to the world. I didn’t think he would be clueless, though. Holy shit Paco, this guy is slowly figuring out he is not on a campaign anymore and he has to do what is right for our country, not what the magic eight ball tells him. I know many people who love him and he can do no wrong but come on. He has as much of a clue of what to do in the Oval Office as I do in a nuclear propulsion lab. But, I will still support him. Like I have a choice.

We are still fighting in Iraq and Afghanistan and we, as Americans, still only care about the Jersey Shore, The Hills, Kate Gosselin and American Idol. Just the other day we lost 4 soldier all to combat action in the Helm Providence and I over heard a girl state she didn’t realize we were still over there and how stupid it was that we were there. To that, I say she is right. Why are brave men and women dying for her dumbass? 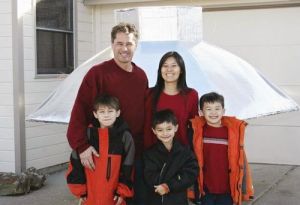 This story marked a year that I will look back with a smile and say, “no shit”. The Heene’s faked there monkey-kid’s heart stopping castaway in a weather balloon. This national hoax was one I will not soon forget. And for that, I love them. Especially when the poor kid puked on the Today show. Why these people don’t have a reality show is beyond me. I say, forgive them and share the train + car + plane + boat + eighteen wheeler crash with the world.

We lost quiet a few celebrities this year too. Of course Micheal Jackson dying was tragic and both Patrick Swayze and Farrah had been circling the drain for years, it was  Billy Mays, however,  that made me pause in shock. He has been a staple on this blog and for that I still fly my OxyClean flag at half mast. And John Hughes! What the? You see, too many to list.

So, on to 2010! There has been so much this past year that my head is still spinning but the one thing for sure is, I am bloggin’ up a storm. So many ideas and so many awesome issues. I will leave you now with an artistic rendition of my thought process.