Sometimes I think that my blogging has bled over into my everyday life in such a way that no matter were I am or what I am doing, I will always be on the lookout for odd ideas. I can’t tell you how many phone pictures I have taken over the past year leaving strangers puzzled asking, “why did that guy just take a picture of his food?”. It’s funny to think that this hobby can be practiced at anytime or anywhere. Shit, it beats model ship building!

But around 3am on Saturday it became obvious that I might be going a tad overboard. I woke up half way through the night and staggered to the bathroom. Just as I was about to step onto the tile I noticed something with my peripheral vision. It was a large black shape with distinct features that appeared to be legs. Immediately I concluded this had to be the biggest, scariest spider that was indigenous to the northern Atlanta suburbs. But instead of finding something to squash it I instinctively grabbed my phone and squeezed off a shot from the camera so I could later document the heroic battle between me and this very hairy scary arachnid.

After I took the picture I was now on a mission to find something big and heavy to squash the spider. Even though it was almost completely dark I had a good idea that this beast was big enough to eat a mouse so killing it with a shoe was out of the question. That would be a little too close for comfort. No, I needed something with ‘shock and awe’. So I packed my gym bag full of the biggest books I had in the library.

I think the bag was at least 45lbs before I was done packing it. A normal person would have at least turned on the lights during the arming process but not this guy. No, I wanted the element of pure surprise on the spider. I wanted his last thoughts to be “I wonder if I should crawl in the tub to scare Billy or hide behind the toilet or perhaps I could just….”(splat!) He wouldn’t even know what hit him.

So I packed the bag, tiptoed to the edge of the bathroom, raised the bag above my head and with all my might I threw the bag right on the victim. The force of the impact was a crushing thud that could be felt through the reverberations in the support beams of the house. The only thing left of that spider would be DNA and goo. Right after the strike I flipped on the lights to survey the damage. The force of the bag split the zipper and some of my reference books spilled against the doorway. Feeling a little cocky I thought, “now that was a good kill.”

So now to see the mess. I figured I would hose off the bag and throw it in the wash but when I picked it up I heard the distinct sound of car keys and plastic pieces. I lifted the bag to revile that I may have committed a case of friendly fire. But there was a spider, wasn’t there? I took a picture! And if he isn’t under the bag then there is one pissed off beastie close by, ready to chomp my bottom. I ran out of the bathroom and grabbed my phone to confirm that there was a spider and I didn’t only kill my keys. Here’s what I saw… 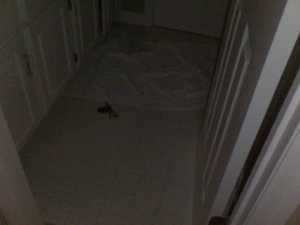 Huh…I guess at 3am keys and spiders look mighty similar. I was a little relieved to know that there wasn’t a huge wolf spider roaming around, plotting revenge but as for my keys…let’s just say the strike was catastrophic. I managed to bash the only set I have and my automatic locks are key operated only now. Honda charges $260 for a replacement set. I hate spiders.

25 thoughts on “A Spider Made Me Destroy My Keys”