Every so often I come across something on the Internet so brilliant, I just can’t keep it to myself. I feel like I have to share it with my friends (you are my friends, right?) because I know they will like as much as I do. And if they don’t, I’ll storm out and kick the cat. Well, I’ll give it the finger at least.

So what is this awesome of awesomeness I speak of? Why it is none other than the nemesis of all civil minded people, the great Baron Mind. 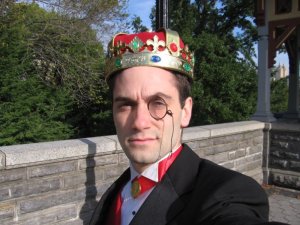 Created by a very funny guy over at Revelation XIII, the character Baron Mind, played and written by Mike Revenaugh and filmed/edited by Kyle Camping, is on his way to become an international web-sensation. And finally, long over do, he is up for an award. The Horrible Awards from Dr. Horrible of the Evil League of Evil, has nominated Mike’s character for the ‘So They Say Award’ for the best non-musical video for the Evil League of Evil. So pop over to here and scroll down to the best non-musical video for the ELE and vote for Baron Mind. It takes literally 23 seconds. Watch the great Baron Mind and check out Mike over at Rev XIII.

In other news, I found out something. Did you know instant coffee has 120 cups compared to the brewing coffee that only has 90 cups for less money? Why didn’t anybody tell me this? Sure, you have to sacrifice some taste but like the great Crocodile Dundee said, “You can live on it, but it tastes like shit”. You know Mick? I can live on this and damn it, I kind of like it. The smell of instant Folgers reminds me of my Grandmother’s house in Pennsylvania. You want me to take you on a tour? The correct answer is yes. 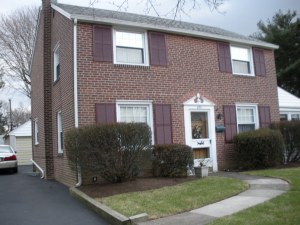 My whole life I have moved at least every few years but this house you see above has remained a constant when I was growing up. I was here as an infant, every Christmas was spent here, more Nerf boomerangs have been eaten by the roof and more light saber battles have been waged in this backyard than Lucas could ever imagine. It’s hard to believe that there are over 30 years of personal memories here. 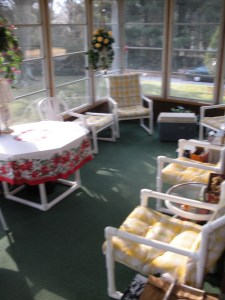 To get in the house we will go around back to the covered porch. The only people who come through the front door are deliveries and company. You’re with me so we will go this way. See that cooler over there? It’s always full of beer. There is nothing better than sitting on the porch with the space heater blaring, drinking Yeungling and reading my Grandmothers Parade magazine. I’m not joking. Just looking at this picture I smell the stale cigarette smoke and electric heating coils. *sniffffff……ahhhhhhhh*

From the back porch we get to the kitchen. This is where my love for instant coffee was forged. But this picture is bitter sweet because as I look at the chairs my mind drifts to the days when I was forced to finish my cooked carrots, no matter how long it took. You see, my grandparents grew up during the depression and not finishing your food was as insulting as telling them the Pope is a bag of dicks. So I would sit there and endure a child’s equivalent to water boarding as I would choke down cooked carrots, dry heaving and tearing. I do, however, have a great memory of my Uncle Mark coming to my rescue and scarfing down my carrots when my Grandmother left the room, giving me a wink and a shush finger as he headed out for his night on the town. I love that guy. 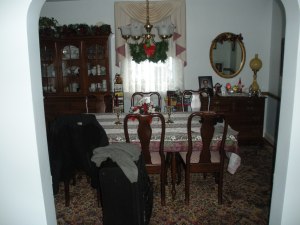 Leaving the kitchen we come to the dining room. It’s funny, but this room elicits a little bit of anger from me and it comes from a silly pet peeve. I hate eating in a quiet place and listening to eating noises. This side of the family eats….well…like a G-damn horse. They never have the TV on so all yo hear is crunching, smacking and nose-whistling. I always show up to the table with two forks; one to eat with and one to stab into my leg out of anger.

The living room! This is where we gather to watch TV and I swear, the local news is on at least half the time. To this day, coming home to Grandma’s is not official until I hear the channel 6 theme song, “Move Close To Your World”. Still makes me smile. I have so many memories in this room like playing with a Hasbro X-Wing fighter, using the Persian rug as the perfect play mat and ruining a vacuum with a missing Micro machine. But, now that I am older this is where my Dad and I have a book read-off because there isn’t shit to do. This past holiday I won with four books. But it back fired on me and I was robbed a few million brain cells after reading Bill O’Reiley’s book, Culture Warrior. I get his points but damn, that guy really talks down to people.

My Grandfather passed away a few years ago. Every time I am alone in this house I tend to stare at the old pictures and remember him. He really was the product of the greatest generation. He served in the Navy in WW2, came home, started right to work at GE making rotatory rocket engines for ICBMs, got married and had kids. I constantly think about his work ethic. Every year he worked like a dog to provide for the family and only had the one week vacation at the shore to look forward to. He never complained though and he never quit to find greener pastures. He was tough, selfless and had a heart the size of Gibraltar. But cancer came and took him from us in 2003. God I do miss him.

We are now upstairs. You are looking at the only bathroom in the house. If you look closely at the frame on the right you will notice that it has a slight curve to it. When the weather changes the wood swells and this leads to the door sticking. I can not take a shower without locking the door so that means the door has to be flush with the frame. So, I spend 15 to 20 minutes in the bathroom and 30 minutes prying the door open. Two years ago I pulled the knob straight off. 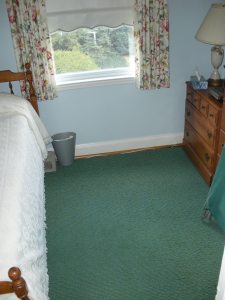 We are going to skip the other two rooms up here and go right to Uncle Mark’s room. This is where I usually sleep when I visit. Notice the folded cot on the right? Yeah, sleeping in here is a challenge to say the least. I try to beat Uncle Mark to bed because if he falls asleep first, it’s like sleeping in the trombone section of an orchestra. There is nothing worse, besides eating sounds, than trying to fall asleep over super sonic snoring and four-note sleep farts. Try to find your happy place during that!

GAAAA! Don’t forget who sleeps in the next room. 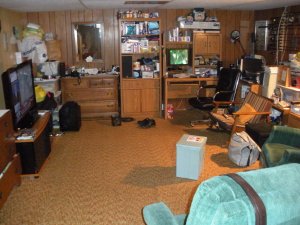 Now we are in the basement and this is the best room in the house. My Uncle Mark has occupied the basement ever since I could form memories. This was the place where I spent most of my time and I know that was a little selfish because I should have spent more time hanging out with my elderly great aunts and eating their blue mints. But seriously though, how could a kid resist cable TV, a bag full of candy next to the recliner, a computer with Duke Nuke ‘Em, and every cool gadget known to man. I mean, I didn’t grow up with cable so HBO and old school Nickelodeon was something you had to take advantage of. I swear I saw the movie The Explores and the show Pinwheel more times than necessary on these AstroTurf-covered recliners. If you clicked on Pinwheel I am sorry, but you will have that in your head for the next 12 years. My gift is your curse. Here are some quirky things around the basement. 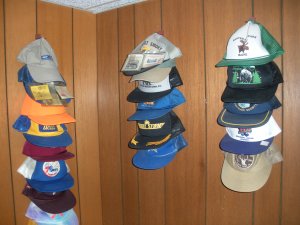 The hat collection. This is actually willed to me. I’d like to say I can’t wait but that means somebody has to die. I’ll wait for the hat collect. 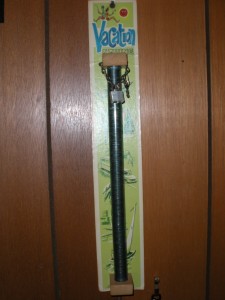 Here we are! The vacation fund and it’s full….of dimes…..and there is a lock on it. 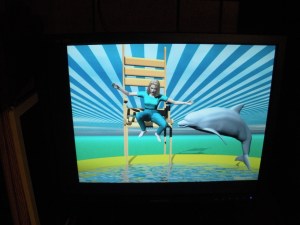 Uncle Mark’s ex-girlfriend was a graphic artist an she designed screen savers. This is one of them. I really hope this was the reason he dumped her because, WTF?!?!

Well, now you have had the tour. Very few people have seen the place that I call home away from home. I hope you enjoyed it.

Here is a survey question: I stayed at my Aunt’s house while I was in town and slept in my cousin’s room while she was away for college. If you weren’t paying attention, in the picture below, what would you brush your teeth with? I hope I am not the only one picked wrong.

EDIT: If you picked this, we have something in common. That stuff really doesn’t taste as good as one would think. Actually, it was the worst thing I have ever put in my mouth. Ha Ha…I know where you are going to go with that Ginny.

17 thoughts on “Baron Mind, This Is A Random Post”