Let’s recap the second season’s Halloween episode, “The Haunting of the Taylor House”. It’s a good one. Trust me.

I can’t say that I have seen all the episodes of Home Improvement but the many I have seen always start with the fictitious show, Binford’s “Tool Time”, where Tim destroys something while simultaneously proving a point in the battle between sexes as Al looks on in disapproval. This episode is no different. We see Al has his jack-o-lantern completed in the image of his idle and show’s competitor, Bob Vila. But Tim has a new way of carving which involves, carving the design, filling the pumpkin with natural gas, a mild spark charge and, of course, MORE POWER.

Al, knowing his boss’s previous attempts which usually led to failure, decides to go for cover before the explosion.

But as usual, Al pays for Tim’s stupidity and winds up with a face full of pumpkin guts. I would say Al should have known better but it was only the second season. These gags went on for eight years folks.

We find ourselves back at the Taylor’s house as Jill, Randy and the little kid no one gives a shit about prepares for Brad’s Halloween party. The whole house is decorated to perfection from skeletons to hundreds of paper pumpkins. There is even a severed monster head in the microwave. Who thinks to decorate appliances? The fuckin’ Taylors do, that’s who.

Jill is having fun creating a concoction using peeled grapes with vanilla pudding (eyeballs and puss) and chocolate pudding with gummy worms (worms in mud). I’ve never been able to indulge in such Halloween themed treats because I will most likely vomit on someone’s sofa. It’s the thought of puss, actually. I blame the porridge scene in the movie, Dead Alive.

Before the party begins, Brad enters the scene in a wicked-gay Raggedy Andy costume. His girlfriend, Jennifer, decided on a couples costume and for some unknown reason Brad agreed to that insane idea. There are plenty of reasons to be made fun of in middle school but this is one that has complete legitimacy. Put your balls in the drawer, Brad. You won’t be needing them for the rest of the show.

Throughout the show the gags keep coming from Tim showing off his fake meat cleaver through the head to the mysterious neighbor, Wilson, carving his own image hidden by the obnoxious fence in a pumpkin. They only had twenty-two minutes to squeeze in all they could and did quite an impressive job.  It’s how Halloween should be.

Before the party begins the younger siblings head out to trick-r-treat but not before Tim grabs Randy’s bag out of suspicion. And rightfully so. Randy was on his way out to create havoc with shaving cream, a six-pack of eggs and a roll of toilet paper. Not too sure how much havoc a kid could create with that light of a load but thinking quick on his feet, Randy explained it was for his friend’s mother who didn’t have time to go to the store and needed shaving cream, six eggs and one roll of toilet paper.

Quickly dismissed, Tim lets them go sans tools of destruction. Oh, and forgot to point out the youngest is dressed like the Tool Man for Halloween. I am not sure if this is true but the alternative script had him catching on fire and beaten out with a series of different golf clubs.

So remember I was telling you about how Brad agreeing to go as a couples costume? Not only did she screw him over by not coming as Raggedy Ann but the bitch showed up with another boy TO HIS OWN PARTY! And this kid is a tool too.

There are certain ways to handle this. Brad could not let them in and revoke the invite. Maybe calmly walk to the kitchen, remove a kitchen knife and make a mask out of their faces? Or just run in ridiculously large shoes outside yelling for everyone to leave him alone.

He did the latter. Remember, his balls are in the kitchen’s miscellaneous drawer for the rest of the show. 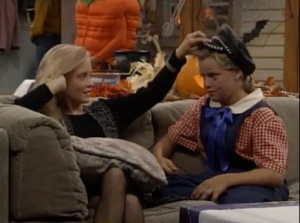 With a little help from his dad giving him a pep talk and some terrible advice about women, Brad goes inside to find out what drove his woman into the arms of an over-acting d-bag. It turns out her reason to make him look like an asshole is because Brad picked another girl for his kickball team. Like a puppet on a string, Brad apologized, completely forgetting he is dressed as Raggedy Andy and she brought another asshole to his party. 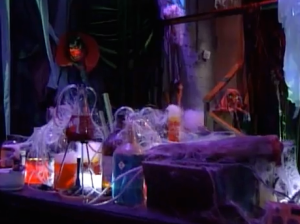 FINALLY! All the drama is behind us and the battle of the sexes has ceased, it’s time to go down to the haunted basement! Jill, in here carrot costume, leads the party down the steps to an amazingly decorated haunted lab full black lights, dry ice and bubbling concoctions with tubes and beakers strewn all over. As they cautiously scan the cellar, they discover…

So amazing and elaborate! It’s like Ernest’s P. Worell’s alter-ego, Old Lady Hackmore, has returned from the grave. As Tim stiffly walks towards the spooked kids, he hacks up a maggot and chases all the guests straight up the stairs. All except one kid. The little asshole Brad’s girlfriend brought to the party. And this kid has serious parental disrespect.

After a rant about how stupid everything looks and how dumb Brad’s little brother is, he get’s personal with Tim Taylor and attacks his show calling it “Fool Time”. That causes Tim to break character from Franken-Nana and point him in the direction to the Binford tool chest.

Arrogantly, the kid circles the tool chest, mocking Tim every step of the way. I hope this kid gets beaten at home and sleeps in a closet because that’s the only reason to be such a little dick. But when he opens the top cabinet, it breaks away to reveal a bucket. And underneath the bucket is…

THE SEVERED HEAD OF VAMPIRE AL!!!

This kid shit everywhere and it felt great to see a haunted basement take a bully down a few notches. It’s the kind or redemption that makes a Halloween addict smile. Go home kid so your dad can give you another cigar burn, you punk!

This was when TV adored the Halloween season. It’s a fun and simple episode that I can watch hundreds of times over and never get tired of. It’s as if the writers put Halloween first and tried to fit a story to fill between the props and costumes. I love it and Home Improvement kept Halloween special for many seasons.