I consider myself a friend to the animal kingdom. There has never been a monetary donation I have not made when asked, either for shelters or endangered species fundraisers. I have had pets and just because I don’t currently reside with one does not mean I don’t want one. In all fairness to them I can not bring myself to have one based on my busy schedule. That is why I was so excited when I got this place and found out there was a dog already living here. His name is Kootanee, after the county we live in. 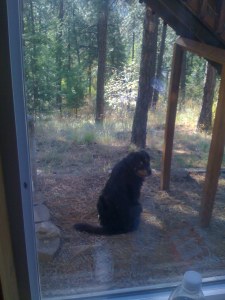 Isn’t he cute? Well wait, Kootanee and I have a love hate relationship: I love him and he hates me. In my entire life I have never had a dog who didn’t like me. It is starting to give me a complex! I even bought a bag of Beggin’ Strips and made a trail from his side of the house to my front door but all for not. I did, however, feed a few raccoons.

The guy who rents this place and Kootanee’s owner thinks that a delivery guy must have hit or pepper sprayed him as a puppy leaving him skiddish towards any male figures. Not even my high pitch “HEY BIG GUY” voice broke the ice. I have even left “cookies” outside of my door in hopes he would use me for food, but he eats and scampers off.

I was a little bummed at the beginning. There were thoughts of us hanging out on the front porch. I would sing Warren Zevon’s ‘Werewolves Of London” and Kootanee would be back up with an “Aroooooo” before the werewolves part. I would carve a pumpkin for Halloween and he would eat the innards. You know, common best buddy stuff. But not anymore.

I left for the weekend to visit Seattle and a mystery person on my blogroll, which you will soon find out next post. I accidentally left my running shoes on the front steps but I wasn’t concerned. Hell, I don’t even lock the door. But when I came home, guess what I found? 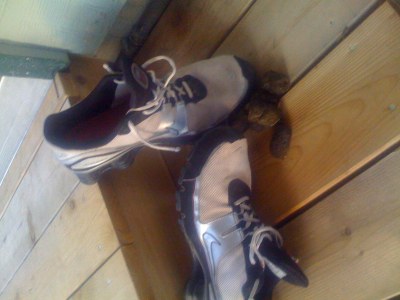 The dog shit on my shoes!!! Are you serious? Have you ever heard of such a thing? After all the treats and fairy talk, that furry asshole took a dump on my running shoes! This was not an accidental poop. My shoes were on steps so he had to actually back his ass up, up the steps, to shit on them. I’m dumbfounded! There have been plenty of times dog shit was under my shoes but never on top.

I sure hope that this winter isn’t so harsh that cabin fever sets in. Because I call first dibs on eating the dog.

13 thoughts on “Kootanee Hates Me”