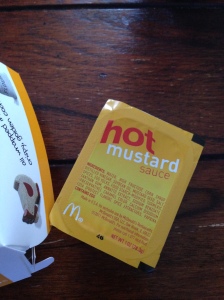 It’s back! Or maybe it’s left over and on its way out? Maybe I went to asleep and fell into a coma and this is a dream about mustard? Maybe this is an alternative reality and mustard is the currency and dogs are our masters? What ever the situation may be, today we are pointing out that RIGHT NOW you can dip your nuggets in the 1983 original, McDonald’s Hot Mustard. This sauce has a lot of lovers and a few years ago when the corporate restaurant giant announced they were pulling the Hot Mustard from the lineup, people flipped.

In fact, there were hundreds of petitions to bring this sauce back. Maybe it was nostalgia because this was one of the four original sauces when McNuggets were introduced? Perhaps McD’s stepped on the balls of the small percentile of consumers who go ape-shit when debates over which Evil Dead is better and have enough time to get upset over mustard? Regardless, McDonald’s had concluded the numbers were not holding in comparison to the others sauces so, in true Burger College fashion, they opted to pull it. Or did they?

Today, the mustard is alive and well or at least at this particular NC restaurant. Google searches are loaded with pleas to bring back Hot Mustard as well as warnings of its impending doom ranging from 2012 all the way to February of this year. However, there is very little fanfare for its revival. That leads one to ask, is it really back or are these Hot Mustards the last remnants of the glory years and when they are gone they are gone forever? Or, did McDonald’s decide to let a few states keep their Hot Mustard to appease the many furious fans of condiments? I’m not a betting man (yes I am) but I suspect the latter is the case.

On another note, WHAT THE FUCK DID THEY DO TO THE HAPPY MEAL BOX? That looks like the last vision you see in bed before an ax falls between your eyes. What were they thinking? It looks like the Olympic mascot should the Summer Olympics come to Iraq! Those murderous eyes scream something evil in backwards latin. I don’t like it and I would prefer it if they brought back the Fry Guys. No one in their right mind can argue with Fry Guys.

I did have the great idea to put the box in the guest bathroom toilet. Now we wait.

Sorry this was a shoddy FLTO blog. I felt I needed to share the news that maybe you too can find Hot Mustard. And if you do, ask for 100. You never know when it will be gone for good.

3 thoughts on “FLTO: McD’s Brought Back Hot Mustard Or Not?”