Idaho: Where the elevation exceeds the population. -unknown

After a night of “moseying” I got up early and did the same thing I did the previous few mornings and made my way back to I-90. Even though Billings was pretty I was ready to get to Coeur d’ Alene. I guess it really started to hit me somewhere between Boseman and Bute that I had only seen a few pictures of the city that would soon be my home. There was this choking sensation in my throat like a sickly kid in school ingesting  peanuts. The enormity of this spontaneous move started to sink in because in 7 hours I would be in a city were I knew no one, had no place to live and school and work didn’t begin for another week. But, that’s how I do things. I do them as risky as possible. 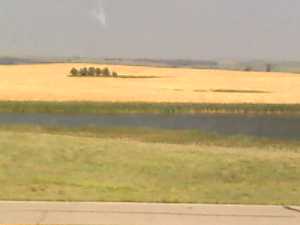 Well, after an hour of making whimpering and wheezing sounds I calmed down and tried to take in some of the great state of Montana which, not surprisingly, was unbelievable. Then came the rain. But not before I stopped for gas and saw Burger Time! I have heard of these but never have I laid eyes on one. And now I have. Sorry about the bug guts.

I didn’t take too many more photos because the last leg of the journey really became hairy between the rain, mountain passes, construction and the 75 mph speed limit that didn’t let up at all. I was trying not to ‘fuck the dog’ with only a few short hours left in the trip. Can you imagine driving 2300 miles and wrecking with only 10 miles to go while trying to take a picture of trees? Almost happened.

Well, I battled the harsh weather over the mountain range and at the peak of the mountains I crossed over to the last state of the leg, Idaho. I was in the upper part of the great mistake, er, state and the next stop was the city of Coeur d’ Alene. Like a bomber pilot on his/her last mission, all I wanted to do was park and say that I made it with no incidences. And in 45 minutes I was able to do just that.

After a few moments of breathtaking beauty, as seen above, I took the City Center exit and made my way towards the visitors center so I could get a list of hotels and possibly a tip on where to get a couple of beers. That’s always of importance to me. I’m Just being honest. So I pulled in to the parking lot, stretched and walked up to the steps of the visitor center.

I don’t know why, but I was a little disappointed I didn’t have a welcoming committee awaiting my arrival. I imagined the mayor, Miss Idaho, a rodeo clown and a member of the local Native American tribe, all standing there with a basket of coffees, fruit and a ‘Welcome To Idaho’ t-shirt. Nope, it was just me and a dirty car.

So, the lady at the help desk did just that; she helped me. I found a Comfort Inn to shower and unpack a little and then I walked around the city center keeping an eye out for any welcoming places to drink a couple of cold ones. It was pretty chilly out too. Forgot to mention that I was wearing a sweater.

Foof! I look spent and I think that is with good reason. I found this really cosmopolitan bar called “The Beacon” that was full people in their late 20’s early 30’s. I didn’t stick out too much but I felt alone. Jim Morrison really hit it on the head when he sang “..people are strange, when you’re a stranger. Face’s look ugly, when you’re alone..” I suppose the bartender felt a little bad for me because my tab was cut in half and she gave me free shots. Who said pathetic looks don’t go far? Anyway, I made my way back to the room, grateful that the trip across the country was over, turned on the TV and drifted off to the theme song from Cheers. I want to go where everybody knows my name…

So, that wraps up the trip but I have been here for a few days and there is so much more to tell. I’ll keep these posts rolling. But for now I will leave you with a little known fact about Idaho. Above every urinal there is a head butt dent. I never knew that! And….now you know. 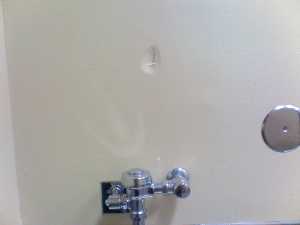 22 thoughts on “The Great Trek: The Last Day”