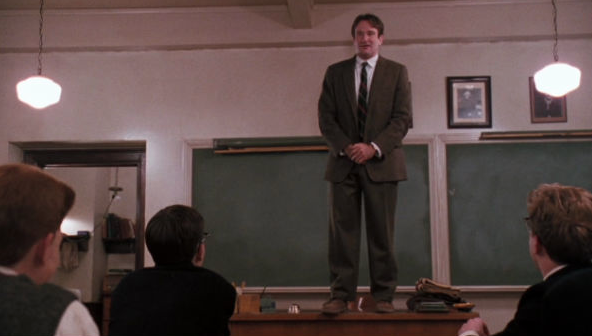 Before I begin this post about frivolous spending to decorate an office that should be renamed “Josh Baskins’ apartment”, I need to say something about the passing of Robin Williams.

He died today. I never knew him but the effect he had on me was nothing short of the impact of losing a family member and maybe we can all blame that on this TV generation. I loved him as a small kid on the show Mork and Mindy, cheered in the theater with Hook, confused by Mrs. Doubtfire, cried for his character in Good Will Hunting and forever changed by Dead Poet Society. He is gone but like all great people, his legacy is forever. It’s not like me to be emotional but you, Robin, were a giant and your fall has crushed me.

So! With drier eyes I will now get on with the show. I have been so very busy between work and this crazy upcoming season that I have been finding smaller enjoyment by drinking a couple of glasses of wine at night and let my fingers do the shopping via iPad. You know what that leads to? That’s right, a surprise package a couple of weeks later and possible re-gifts later in the year.

This is what I have acquired thanks to eBay, online links and the random local antique shops who have no idea what gold is hiding in their inventory. Well, not gold they may consider but gold to me.

WUUUUT? You mean to tell me that President Nixon had Charles Shultz in his political pocket? No way. No way, no how. But I have to hand it to the campaign! They knew how to get to the Halloween and Pagan voters, although in the 1960/70’s, being a macabre lover was a bold underground reach. If I had this hung on my doorknob it would be difficult if not impossible to vote another way.

I saw this on eBay and bought it for a friend. I honestly can not believe I won this for only $10 which leads me to question its authenticity. Made of cardboard paper and in amazing shape, I will say this was an actual campaign door-hanger but can not be an original. But that doesn’t mean I don’t love it any less. I never buy things for monitory worth. It’s VeggieMacabre worth and this is worth 17,900,453 Plinkyplanks which is my currency. Equivalent to three pounds of wild cherry Starbursts. So, a lot! 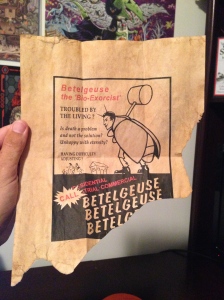 “Say it ones, say it twice, third times the charm…”

Holy shit, it is the cleverly placed ad that fell out of the Guidebook For the Recently Diseased. Er…Deceased!

I loved this the second I laid eyes on it and I knew it had to be mine. Tim Burton has a way with making the supernatural feel completely normal and this extermination ad has been planted in my brain since 1988. It’s even perfectly torn to hide the treacherous third “Beetlegeuse” so not to accidentally resurrect the deceased graduate of Julliard who has seen The Exorcist way too many times.

The role reversal in this ad is fantastic, even making the fleeing family obese. I have tried pausing the scene in the movie and while I don’t think it’s 100% a match, the fact it’s prepackaged with the same fold lines makes it pretty great. If I find another, I will place this in a gospel next time I go to church. So…stay tuned this Christmas. 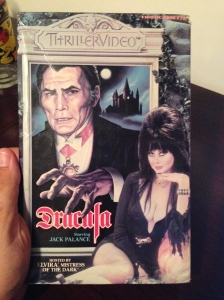 Shitassdickticklefuck!- “If I fake Tourette’s I know I don’t have it.” – Bob Whiley

Can you believe Jack Palance was Dracula?!?! This happened. Not only did that happen but the “Queen of Macabre” and “Mistress of the Dark”, Elvira hosted this ThrillerVideo copy on VHS and I feel like smacking my thumbs with a hammer for not having a VCR. Holy shit! I love Jack Palace and he shit bigger than Billy Crystal which we all know, but at the end of the day, it’s all about Elvira. ALL ABOUT ELVIRA.

Back in my day we like the fast food advertisements. We even wore them to work! Well, maybe some people did who worked there. I lucked out and found this in a pile of ties in the town of Pittsboro, NC. They gave it to me for free. How many McMuffins do you think I will score, mang?

Another conundrum by having the means without the way. I have a classic collection of Simpson episodes placed in amazing packaging and no way to view them. The same place I score the tie and the Jack Palance Dracula video but this time I paid the price of $7.00. Pretty awesome considering the going rate on eBay is $29.

I love the Simpson macabre episodes and this collection is not just the Halloween episodes but the darker ones which makes my cold blood a degree higher. Plus, it’s strange to see the biology of The Simpsons. Their skeletal structure includes their hairline. BEEEESH!

What the fuck was Max Headroom? Seriously. It seemed like a glitchy advertisement which 80’s companies could not harness well until Back To The Future 2 came out and even then relied on the the dickhole from Iran and Michael Jackson instead of Max. “BBBBBeans”.

The only reason I bought this was because of a family get-together in New Jersey with the whole family during Christmas sometime around when the Max Headroom show was popular. My drunk step uncle was telling a joke about how to blame the dog for farts and made my great-aunt laugh so hard she leaned down and started a forward momentum which resulted in a run/fall/hip injury. I was a little kid and before being rushed from the room had to hear, “Rose needs another pair of panties. Go upstairs and get some panties!”

This will be passed alone to one of you luck readers. 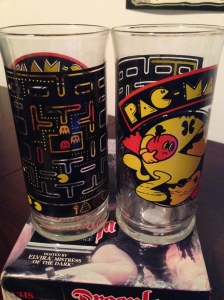 I own half of a set of Pac-Man glasses. Paid waaaay too much for these. But milk looks better with a black fore-drop.

The toy among toys, the ships among ships, the movie among movies; the Millennium Falcon. Good Christ I wanted this toy so bad but sadly had to get pieces of it at a garage sale in the early 1990’s for .50.  At that time I really didn’t care about the fun of starship toys but rather the defeated marathon race runner who crossed the finished line with the final words, “see…told you I would own it.” Then died.

Today as an adult, I found a place which sells a couple of Millennium Falcons and I bought not only this one but the another just to throw it out of my sunroof. Apparently it IS impossible to make the jump to light speed without R2-D2’s help.

Bought it for a cool $20. Thanks to my buddy at a store already blogged about.

Okay, we come to the last item. This was not a drunken eBay item or a flea market find. This has been a dream since I was five years old. See, I grew up in Marietta, Georgia in the early 80’s and lived only a half-mile from Showbiz Pizza Palace. My dream was to have a tunnel from my room to the their main game room in that restaurant. Honestly, it was actually proposed to my parents many times before I finally moved out to go to college.

Today, I have all these games in an arcade platform and no quarters are needed. I’ve played seven of the sixty.

I guess old and silly fantasies feel good to finally capture though the chase is sometimes more rewarding than the catch. I love this arcade game, don’t get me wrong, but deep down I still want a tunnel to Showbiz after all.

Thanks for not completely judging me for these silly buys. I thought you might like a few and actually, if you read along you might be the new owner of  most of these finds. FOR FREE! Keep posted because it is coming!

Who is excited for September? Me Me Me!