I remember a time when a trip to the video rental store was a Friday night must that determined what I would be up to for that night and possibly Saturday night too. The whole process took almost an hour to decide what two hours I would sacrifice my youth on because in a store with nearly ten thousand movies, there was a high probability that you could end up with a doozie. That probably explains why Iron Eagle was rented close to two hundred times.  And Muppets Take Manhattan. And National Geographic documentary on Sharks. Anyway, I had a very particular genre of movies that didn’t leave much room for anything new and looking back, my parents must have really dreaded Friday nights in the living room. Who can possibly take that many volumes of Gallagher stand-up without going a little mad? But all that changed one fateful night in 1991 when I slipped the surly bonds of Blockbuster’s normal selection to touch the face of horror and forever alter my Friday nights…and sleeping habits. This video was True Hollywood Ghost Stories and it terrified me. And perhaps it took hold psychologically because even today in my Youtube search, when I found this on a whim, because everything is on Youtube, I had this overwhelming need to look behind me.

I am not sure why I rented this particular video. My idea of a scary movie back then was Harry and the Henderson’s so it’s a wonder how this ended up in the family VCR. Looking at the cheesy late-eighties graphics, there isn’t much to be too disturbed about but that is where this film takes a turn for the unsettling and really takes on the same creepiness as the popular show, Unsolved Mysteries, with that amazing Robert Stack voice. The cool part about this film is it has a documentary feel to it and it is composed mostly of clips of old to recent horror movies. The kicker, and reason it made my blood run cold, was how it explained the supposed real ghost cases that the movies were based on and behind the scene disturbances while making them. Now imagine, if you will, a young boy who had never seen a horror movie, getting all the scariest scenes grouped together and then learning about how they may be true. Yeah. There was a spike in the utility bill that month from the hall light being left on at night.

Meet the host, John Carradine. He wastes little time in the introduction to shift from zero to one hundred when he begins with how the film, and the scariest thing I have ever seen, The Exorcist  not only had evil happenings on the set but was based on a real event. I had never even heard of this movie until I rented Real Hollywood Ghost Stories so when I first laid eyes on that grotesque appearance and raspy voice of the possessed Regan, I think I just sat on the floor and cried. I’m not kidding, I was a little pussy as a youth. During little league baseball I once dove for cover from a pitch that ended up being a strike. So, seeing the most terrifying movie ever made and learning how it was true all in the time span of ten minutes, I shorted out. And this video rental only got worse from there.

The beginning of The Exorcist part was the author, William Peter Blatty and he described what his inspiration for writing the book that later became a movie many believed actually had the devil imprinted in the film itself. He said he witnessed a phone picking up off the receiver itself and come down onto the table. I am the believer that chairs, dishes, phones, shoes, anything that doesn’t live and moves on their own is so much scarier than a creature jumping out at you. So as a very impressionable kid hearing this account had me captivated. Especially when it was followed by this face:

Even as I type this I hate looking at that picture. It had such a profound effect on my as a child and it was many years later that I finally summoned the courage to rent it during a high school sleep over. But this introduction to The Exorcist  was enough for me at the time. Especially learning it was all based on true events, people died working on the film, it caused audiences to go crazy and not to mention the fact that I was looking at something beyond my comprehension to what I deemed scary. It’s like growing up training ponies and then someone puts you on a bull at a rodeo. I could have used a gradual transition to horror.

The next story was of a real haunting of a house in Hollywood owned by an affluent couple, the Sommer’s and it was so bad they ended up selling and becoming a world-wide media spectacle after their story was published in Life magazine. Even the photographer was a skeptic couldn’t explain why or how his film kept having shadowy figured in motion from frame to frame. I loved the story but of course, as a kid I took it all very seriously and every bump was a ghost and every settling noise was a poltergeist. This didn’t help much, especially when they tied in the story of Steven Spielberg and Tobe Hopper’s, Poltergeist, and how much like The Exorcist, people died from this film and the set even burned down. Great. I don’t think this would have been quite as impacting if it didn’t have detailed accounts from Life magazine and NBC reporters that witness all these events. Even though I was an impressionable kid, I knew the difference between loons and credible people. Especially the next “true” Hollywood account about a woman who was assaulted by what was to be believed to be an entity. Hence the title The Entity. 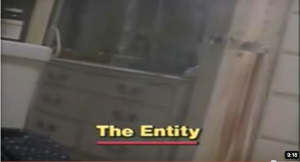 This didn’t go over well either because learning how the local university recorded and documented this story and it became a constant in the world of parapsychology, even studied at the prestigious Duke University, I did not like learning about rape-ghosts. Nope. It’s as if this video kept trying to out-do itself! Each movie and real case scenario was a segway to the next bone-chilling tale. Like how The Entity was a great shift to the world renown Amittyville Horror. And of course, I got a taste of it by only seeing the most frightening scenes.

Much like the Poltergeist scene, a rocking chair doing what it does best by itself is about as scary to me as it gets. Especially when a kid is interacting with it and when an adult comes interrupts everything goes quiet. That is until the adult goes tot the window only to be met with glowing eyes and pig grunts. From then on I did my best not to look outside at night which proved to be tough because I had an atrium in the center of my bedroom.

Well, this fateful video rental kept up the creeps and went into the legends of Hollywood and their ghostly encounters like Houdini and the original Superman who committed suicide. It’s odd that both the original and the motion picture Superman was named Reeves. Is that a well-known fact? Maybe it is. Anyway, the scares peter down a bit but it is still a pretty good watch, even for today’s standard.  They leave the viewer with a really cheesy music montage of a pretty corny song and truth be told, it’s absolutely perfect. It even manages to leave you with the warning not to take for granted you are ever alone in the dark. I took that warning to heart and kept the lights on almost through middle school.

You can watch the whole series on YouTube and I’ll start you off with the first part. Enjoy this as much as I still do. Sometimes it’s nice to look back and still get the same impression from when you were so very impressionable. Sleep tight!

7 thoughts on “The Video Rental That Made Me Weird”