If you have been reading VeggieMacabre for any length of time then you know I am a beer guy and really not much of a mixed drink fan. Sure, around Thanksgiving and Christmas I appreciate a glass of eggnog or apple brandy with a cinnamon stick but usually, it’s all about the beer. I guess it’s similar to cat person versus dog person, if the cat person didn’t completely hate dogs.

Where am I going with this? Oh yeah!

I prefer beer over liquor but if it is named “Ghoulish Potions”, I like liquor. This article might not clear the trees on take off but I am about to drink five martinis so it will absolutely land like a rock. Crash positions and brace for impact. 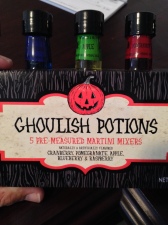 We are going to start off with Strawberry. As you see above I don’t have a proper shaker so I will have to make do with this terrible and embarrassing martini set I put together from my glass cabinet. Don’t worry, vodka mixed with sugar-water shouldn’t really be any different no matter how it’s mixed.

So, I am starting out with strawberry. I know, I have already said that. A shot of Absolute vodka, the whole mini bottle of the strawberry martini mix, a few quick shakes in cheap plastic tumblers, and I have a drink Dracula approves of. Or perhaps not. I tasted this little drink of terrible and I can completely see how someone could have a real bad night drinking a few of these.  Imagine dissecting forty Gusher fruit snacks, extracting the goo and adding vodka. I can promise you no amount of Tums will neutralize this. 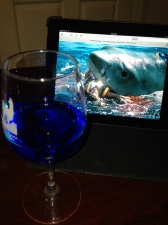 Blueberry! I actually didn’t mind this as much. Kinda of weird, but this mix has twice the carbs and sugar of the rest of the potions so already it had something a little different to separate it from the pack. Besides acknowledging that it’s horrible for you, I am in love with the color. All blue drinks get an automatic passing grade with me anyway, but the taste wasn’t at all offensive. And that surprised me because I have always stated blueberries to be the “just okay” berry. 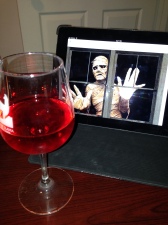 Pomegranate martini mix was an odd beast. I wanted to like it but the pervasive plastic after taste kept me questioning whether this was a fruit cocktail or a melted down M.U.S.C.L.E. man cocktail. The color isn’t as neon as the strawberry or raspberry but it is just as offensive to the palate. If you have never had pomegranate, don’t let this be your first experience because that would be like finding a person who has never had a banana and feeding them a yellow pillowcase. (Damn, these drinks are kicking in, can you tell?)

Green apple! I remember when green apple martinis were all the rage because young people (thinking specifically of my old dates) didn’t know a good drink if landed on their face and started to wiggle. I am being snobby, aren’t I? Sorry, it’s just not my bag and if I wanted a drink that was half Blow-Pop, I wouldn’t run to sour apple.

This mix is not much different but in a shocking twist, it is one of the lesser offenses in the pack. I was expecting a green spew of sour mix but instead its milder than most apple martinis I have had. I am not saying it’s good but I didn’t have to stick my finger down my throat and jam an insulin needle in my neck after the first sip.

I was going to review Raspberry but the silent “P” angers me so I will leave you with this: it sucked. It’s red, distant aftertaste of raspberry and so sweet I actually had visions. Of what, something something Hellraiser something Event Horizon.

Well, that is my harsh review of the “Ghoulish Potions” which are exclusively at Target. I know I was a Negative Nancy about them but I rarely drink anything but beer so it’s kind of wasted on this guy. I will say, you could probably make a delightful drink with these if you ignore the instructions that calls for the entire bottle to one ounce shot of vodka. Maybe mix half a bottle to an ounce and a half with tonic to cut the sweetness? I could be down for that.

I did have a little scientific method to this taste test. You will notice the horrible handwriting I have been practicing since over half of my career is hanging around physicians. You can still read mine so there are improvements to be done.

After this test and many awful drinks I found myself rapidly passing through the stages of drunkenness with my office buddy. I have to hand it to him, he has more patience than I would have.

Thanks for putting me to bed with a trashcan close by, buddy.

EDIT!!! The package clearly states that Cranberry was suppose to be in the pack but they secretly replaced it with Strawberry. You sneaky cheeky dicks.

Last week I pulled a late one at the bar. You would probably know this from my drunk post. Every so often you need to let the hair down a little and have a mid week blow out. I’m not as young as I used to be and this late night cost me plenty. And by cost me plenty I mean I got sick (flu-ish) and felt 80 for a week. Take a look.

It’s nice to have a good buddy who is a bartender. Buuuuut, I don’t drink and drive so at 1am, this guy passes out the shots like a Jehovah’s Witness passes out pamphlets. Any other place this would be welcome but I live on a mountain guarded by deer and bigfeet. The last thing I want to do is wake up to find I ran over the missing link in the great Northwest.

If you are with a group of your friends, especially these guys, don’t be the first one to pass out at the bar. Well, it’s never good to fall asleep at the bar to begin with but work hard, play hard and all these guys are firefighters. It’s a long day and after 1am, I suppose a nap maybe needed. But nap at your own risk because…. 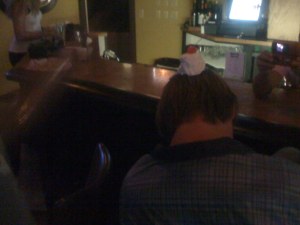 ….you may become a sundae. I kind of feel bad about this one. Who am I kidding? This is hilarious. And believe it or not, the cherry stayed on for over an hour. I had 5 dollars on 20 minutes. Poor Ted. He was really tired and after he woke up, he wasn’t even mad about the whipped cream in his hair. He was too busy puking in the urinal.

That’s two! It’s not everyday you can witness two people nappinating at the bar. And now I can’t decide which is weirder; the fact two guys passed out within minutes of each other or the fact I took pictures. But I only had three beers under my belt and a clear head to archive this just for you. And if you like that, you’ll love the next place we went called The Slab. A real honky-tonk club.

Shut up!!! We walked in and it was straight out the movies. A smokey bar, eight foot ceilings, the band was playing a Dwight Yoakam cover, we were the only ones without a cowboy hat and they only served Budweiser and Budlight. Last year I was in South Beach, paying $7 for a Michultra in a club that required at least a $200 minimum cover on the credit card. This year I am paying $1.50 in a bar full of cowboys, smoke jumpers and truckers and it is cash only. I prefer the latter. 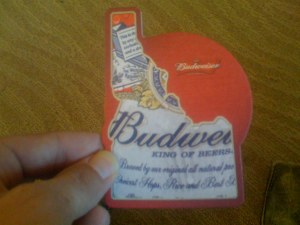 I don’t have any words for this. All I can say is…….perfection. If only this came in a t-shirt. Because this would be the Christmas present for everyone. And you would have to wear it whenever you are with me.

Thank you all for the well wishes. Mom did great and is recovering. They expect her to be home before the week ends so all is good. You people are the greatest. 😉