It’s no secret that I have been scarce to say the least but that doesn’t mean I am not with you in spirit. It’s really just work, you know. It’s not like I am doing exciting things with a whole new set of friends and priorities only to peek my head back here because I needed a sweater to wrap around my neck to match my pink popped-collar polo shirt only to see all my old friends still sitting here waiting, rocking Misfits t-shirts and drinking beer leading to an awkward, “oh heeeey…how have you guys been?”. No, it’s seriously just a wicked-crazy quarter that requires less fun and more work. Trust me, I am still the same and I am back to writing nonsense. Just like this paragraph. Total nonsense.

So how do I come back to normalcy? I am finding that writing is much like riding a bike for a long distance and then jumping off to a full running sprint; it’s awkward and you look like a fool until you get your groove back. I need to get my groove back. And what better way to get the ol’ groove back than to review a beer and discuss another Creepshow chapter that is near and dear to the heart. Let’s start with the Creepshow!

I am going to start with the intro to the entire movie for two reasons: one, it’s amazing and two, Tom Atkins makes it amazing. Just look at this perfect 1960’s style house that is modernized to the early 1980’s! This was my childhood, folks. All  in one shot and I love it so.

We can hear from the outside of the house that someone is in deep shit for having taboo literature and buddy, he is getting a lashing from the legend himself, Tom Atkins. Tom is giving the ol’ what-for over finding a copy of the comic, Creepshow, in his kid’s room and to defend himself, the kid points out it’s not as bad as some of the magazines Tom has in his sock drawer. 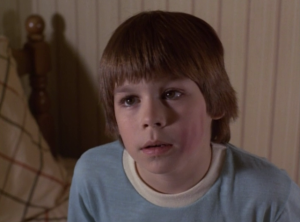 And that’s when his son learns about “five-figured justice”. You don’t TALK ABOUT TOM ATKINS’ SOCK DRAWER! The wife tries to calm Tom down but the foot came down and now the comic is headed for the garbage. Even after pleads from his son, Tom just really hates this comic book.

And there it lays in a Oscar’s house. But soon Tom gets an uneasy feeling as he heads back to the house because in the distance, you can faintly hear a creepy laugh.

Now that the law has been laid down, it’s Miller time. His wife is noticeably upset (based on her furious knitting) but what’s done is done and Tom kicks back a brew stating not once but twice, “That’s why God made fathers, babe.”.

Let me first say that this kid is pretty cool. Noted he came from a Tom Atkins’ character’s loins but still, his room decor and choice of comics makes him a friend of Veggiemacabre. Anyway, he is also awesome because he is not scared at all of this thing looking in his window…

Had it been an all you can eat Indian buffet night and I saw that staring in my window, all I can say is the sheets would have been chilling in Oscar’s house with the comic. But not this stud! Nope, he smiles away pounding his fist into his hand. Vengeance is close at hand. 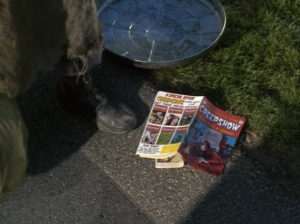 We come to the end of the movie but before the credits roll we get to see what Billy (Tom’s son) is going to do to his oppressive father. But even before that we get a nice treat by a little known cameo from..

Tom Savini and Marty Schiff who were also in cameos in Dawn of the Dead! Instead of a motorcycle gang, this time they are garbage man who thumb through the discarded comic looking specifically at the dumb stuff advertised between the stories. One in particular caught my eye.

I know this was from an earlier segment but I love this ad. “By selling Bolt, the family newspaper nobody knows about and win great prizes like:

Seems like a bargain! Especially if I am selling a newspaper nobody knows about!

Looks like Tom was in some considerable pain last night and didn’t get much sleep. That is probably because little Billy sent away for the Voodoo doll which surprisingly was an awesome buy!

I really don’t know the moral of the story here. Don’t hit your kid?  Don’t mouth off to Tom Atkins? Be careful what you hide in the sock drawer? Well, I think what we have here is that if Iran really wants a nuclear warhead, they are looking in the wrong magazines. 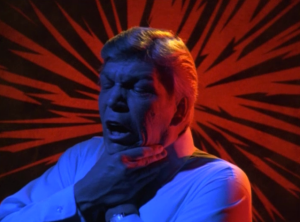 2 thoughts on “Where Did You Go?: Me! And Another Creepshow Rundown”