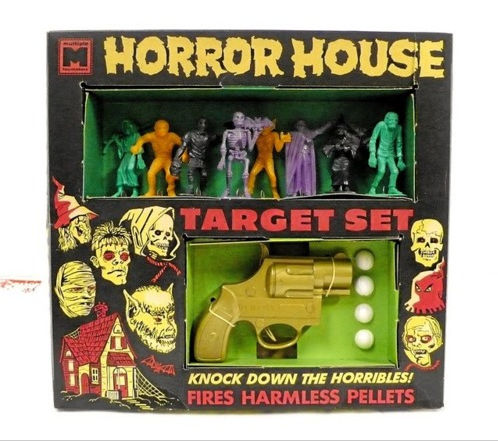 I have been a huge fan of John’s site, Freddy In Space, for quite sometime and if you want to know anything horror or related to that genre, this is where you go. He’s a great writer and a good blog-buddy. So after you read this, please pop over and take a gander at an awesome site.

So, John always has great ideas when it comes to joint blog-ventures and this one is a topic that I just can’t pass up. Back in the mid-eighties a great movie introduced me to Universal monsters in the film, Monster Squad. I could go into the plot of the film but for this project we only need to look at their treehouse.

I think every kid had a dream of starting a secret club and building an awesome fort for meetings and sleep overs. John asked the question, what mandatory ten items would you have in your Monster Squad Treehouse? So here are mine.

I am a huge sucker for vintage horror memorabilia. I don’t know if I would ever taken this out of the box if I owned it but as a kid I am sure this set would have slowly disappeared from poor marksmanship. But it is fun to have an initiation where you have to kill at least four monsters to join. 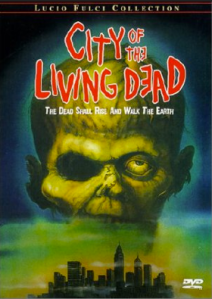 These posters and VHS box art used to terrify me as a child when we would rent movies at the local rental store but after around the age of nine, my fear turned to fascination. Pretty soon I was that kid from Salem’s Lot who had an entire room full of  macabre items and for a bit my parents thought I was Satan’s minion. It would have been nice to have a club house where I could enjoy these pleasures only with fellow weirdos.

Of course my Monster Squad Treehouse would have power and with that power would come the ability to play scary video games. My absolute favorite right now is The Shining version of Duke Nukem. I don’t think any haunted hotel and axe murdering psychopaths would be a big deal with a shotgun. Groovy. I like to image my buddies playing this for hours and talking in their best Duke Nukem voice.

See? How can you not get into this? Sure “Ghosts & Goblins” is fun to play but when it comes to my club, only gratuitous sex and violence. Thanks Duke!

Every club house should have a proper amount of nudie magazines and my Monster Squad Treehouse will have a double secret hiding space where our stash will be hidden. This is as good as any currency between like club houses. I still have a really shitty Freddy Krueger glove from such a trade. It went like this:

Me- “What will you take for Freddy’s glove?”

Me- “I have a rookie Mark McGuire card in a case?”

Oh we would need masks! I love these rubber and latex art. It would be a trip to read Famous Monster Magazines in these masks and eat our weight in Twizzlers. And after that we would sneak down and scare my buddy’s sister.

I don’t have a whole lot to say about masks but if I had a Monster Squad style Treehouse without a Frankenstein’s monster mask, I might as well call it a Rainbow Brite Festivity Club. Cause only Sally would join.

This is a must for all club members. It’s a test of courage for any ten-year old who has an eye for monsters, ghosts and creepy things. I remember when I first watched the whole thing as a kid and really hated watching the sun go down for fear of heading to bed. It’s a much better film to watch with your gang during a sleepover. And it’s fun to watch new members squirm during the famous needle in the neck scene.

If I had a Monster Squad style treehouse Halloween candy would be available year round. Of course if this was back when I was ten, I probably would not have opted for candy corn since that’s more of a nostalgic treat for me today. I probably would have  had quite a bit of Bonkers candy, instead. Remember those? Why the fuck did those disappear but we still have Peeps? This world confuses me at times.

Just looked up Bonkers and they are coming back for Halloween 2013! And the day just became brighter!

I don’t think Legos had a specific model back in the mid-eighties but if they did, the haunted mansion would be a mandatory decoration in the club. What a cool item to have for kids to piece together. There is no doubt that this would be in a million pieces after it gets put together but I think on a fun friday night in the club house, this would be a cool project.

This is a real thing, right? Gosh I hope so because these would be definite for the treehouse. Imagine the hours of fun it would be to look up ancient spirits from the movie and cartoon like Samhain and the Sandman. Sheesh, even as an adult, the Sandman still is a bit creepy. Am I right?

And Finally…What Ever the Fuck This Thing Is 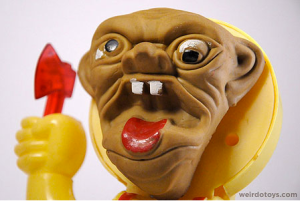 I saw this on weirdotoys.com and this would have been in a prominent spot in the Treehouse. New members would have to leave offering gifts at its feet. All would respect it and nonmembers would never be allowed to see it.

I will be honest, it’s disturbing to look at. Kinda reminds me of Victor Crowley from the movie Hatchet. I mean really, he’s wielding a hatchet while eerie music plays to his distorting face. Absolute perfection to a club that worships the strange and unusual. Because I, myself, am strange and unusual.

So that is what would be in my Monster Squad Treehouse. This is a great idea Freddy In Space!

Be sure to check him out and all those who have participated in this fun little post.