…was everything an adolescent boy could hope for.

Starting out this year’s season of all things macabre, I figured I will write a review or a recap, if you will, of three shows that I distinctly remember getting a case of the heebs over. (heebs- feeling the need to shower after witnessing an event that did not make one physically dirty) I used to love staying up past the surgeon general’s recommended bedtime and filling those late hours with nonsensical television until either there was a disapproving knock at the bedroom door from what I am sure was tattling flicker of luminescence leaking under the said door or Rhonda Sheer’s bubbly personality of USA’s “Up All Night” was replaced by a commercial for a turkey-jerky dehydrator. But of all the nonsensical TV that gave me an allergy to books, there are a couple shows that still manages to stick with me, especially as we creep towards  September and October. Let us take a look at a few, shall we?

Tales From the Crypt was a staple of my teen years and while most of the shows were a HBO platform for many actors to get their feet wet directing without any real reprisals from a critic committee because let’s face it, horror isn’t a critic’s forte, it did produce some of the best casted and fun TV still today and every so often this show would hit a home run in the creep department.

The episode “The New Arrival” starring David Warner and Zelda Rubenstein was a really dark, claustrophobic, disturbing and down right pee-pants oppressing story that left you wanting nothing more than to never chew grape gum or trust anyone shorter than 4 feet.*pours coffee on the floor out of respect for the late Zelda*

David Warner plays a corrupt and arrogant child psychologist that preys on over protective mothers who spoil children with behavioral issues only to boost his failing radio channel.  So in his plan to save his ratings he decides to air a live session at a fan’s house who calls his station. Little does he know that it is Zelda Rubenstein calling him with a case that is most likely not in any text-book or case study he has read before.

When he gets to the house of the caller to begin his radio show he sees how controlling Zelda is and the problematic child is running a terror through the house and is very illusive. Right from the beginning the audience can feel that something is far from routine about this behavioral case. From the screams of the child to the walls caked in grape bubble gum, this reeks of “get the hell out of the house”.  And then we meet the kid.

Where does one even begin to state the things wrong here? Ok, I am not going to go through the entire episode because I’ll post the climactic part below and it would seem redundant for you to watch what I just wrote about so I will just express my feelings.

This episode touched on a few nightmare nerves of mine. The fact that all the creepy shit happens during the afternoon is a big one.  Some people have a certain witching hour and mine was always 4 o’clock. I think it is the way the sun is dimming or the fact that 90% of all horror movies happen at night so when bad stuff happens when Judge Judy is on TV, I just don’t feel right about it. The wallpaper in the house also made me itch. The house had a very dark feeling about it and the wallpaper from the 1940’s didn’t help.

I know those two creeps aren’t creepy to most others but that is what I hung on to. Call me weird but…okay, call me weird. Please watch this. You will see why this episode stands out the most.

Tales From the Darkside was an amazing show that was pretty corny in retrospect but an absolute humdinger when it came to adolescent entertainment of the 1980’s. When I think about Saturday nights as a nine-year-old the theme to Tales From the Darkside is usually the anthem. Back then these 20 minute stories would cause me to sink deep in the covers, never wanting to peer out the window for fear there would be another set of peepers peering back. I lucked out watching this show in an era when kids would be scared over something that makes five-year-olds today laugh. 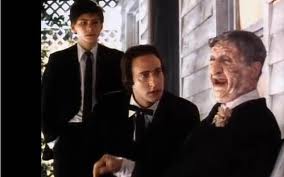 Of the hundreds of tales, I think the early episode called “Case of the Stubborns” was not just my favorite but also the most unsettling. Along with an amazing cast like a very young Christian Slater, Eddie Backren, Bill McCutcheon and Barbera Eda-Young, this famous story is about an old man who is too set in his ways to realize he died. When every one begs and pleads for him to come to terms with his own mortality he merely scoffs at their insensate nagging all the while….decomposing. It really is awesome. 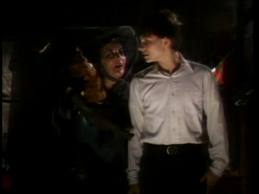 After Slater’s character seeks advice from the neighborhood witch he returns home to try once more to lay his already deceased grandfather to rest. Only with a sneeze that blew off Grandpa Titus’s nose did he finally realize that perhaps, he was actually dead.

There are so many reasons to love this episode and while I wish it was an original story from the show, it is not. I remember reading “A Case of the Stubborns” as a child growing up in the south. It’s just nice to know Hollywood didn’t muck it up. I will say, the first scene when Grandpa Titus walks down stairs, I would have put my breakfast down my pants because it was going to end up there anyway.

Who wants to be disturbed? I do! I do! Well, for the final segment of the first real kick off of the 10 week count down, I present to you a gift; these three Tim Currys. In another Tales From the Crypt episode, “Death of Some Salesman”, Tim plays all but one role and is even given an Emmy for his performance. 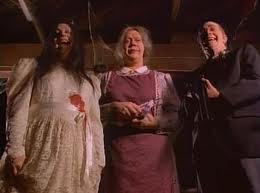 Ed Bagely Jr plays a corrupt traveling salesman who preys on naive customers thinking they are buying what really is an imaginary cemetery plot. He does pretty well too until he happens upon the home of Ma, Pa and Winona Bracket, all played by the infamous Tim Curry. He thinks he knows who they are but he has no idea what they do. They collect salesmen. (As a sales person myself, this speaks to me more now that in it did back in the day)

I love this episode for so many reasons I can’t even narrow it down to just three. All I know is that Tim Curry manages to do what he does best and that is make you squirm. Especially the god-awful sex scene between Winona-Tim and Ed Bagely. Man, that must have been an awkward shoot! Enjoy this magnificent clip!

There was a shorter clip of just the weird sex scene that I was going to post but the guy who made it was videotaping it from his TV with severe asthma. A tad distracting.

Well I hope you enjoyed these three classics in B Television. Whether you can identify with them or not they really are fun. And if you are going to destroy your vision, waste your life or rot your brain, shouldn’t it be a little fun?