It’s kind of funny how the most simple things in life can solve some of the most complicated issues. I know I haven’t been posting much and there is a good reason. A couple of weeks ago I was at the fire house and we were called to respond to a fire. The details were not clear until we pulled up to the house but when I walked in…I don’t know what to say.

A 6 year old girl was standing next to a wood burning stove that caught her pajamas on fire and she suffered 3rd and 2nd degree burns to over 90% of her body. I will skip the details but I will say that night I had to throw out my clothes and keep busy not to hear the sounds in my head from that call. She’s just a baby and that will haunt me for sometime to come.

I’ve seen a lot of bad things in my life and I can process it fine. One way is to escape to nature and the other day that is just what I did. And wow, did it work a miracle! 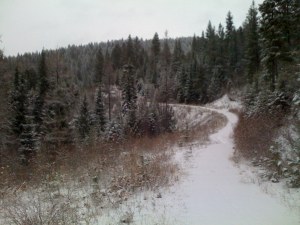 This is the trail right next to my place. It goes for miles without any human sounds or contact. This tranquility of being alone on a mountain while the snow is falling is just what one needs to clear the mind and remember who you are and why your here. I’m not too religious but it is hard to argue that God isn’t real when you are surrounded by beauty.

The sounds of the wind blowing through the trees and distant branches falling was so peaceful I felt as if I was the last person on earth. I walked about five miles up the mountain and sat down. Taking advantage of the situation I took out my iPod and listened to the only song that made sense of the moment and reflected on how lucky I am. Here it is, “The Wind” by Cat Stevens.

Damn it feels good to be a gangsta!

I guess Iam in a little bit of a melancholy mood this evening. It’s been a long day and I find myself, again, in a hotel room far from anything familiar. Really, the funny thing about long periods of solitude without much human interaction is the chance of reflection. So I thought I would listen to some songs on YouTube and reminisce because of course, nothing is closer linked to my memory than songs and soundtracks. But I have to warn you, these are sad songs.

I can really take or leave Bruce Springsteen and it’s not because of his music. Personally I think he is a pompous jerk especially after a 60 Minutes interview where he basically told the reporter he is smarter than the average American and is the voice of the majority. But I digress. His song “My Hometown” is a song that gives me the chills just hearing the intro keyboard. I consider myself to be very patriotic but not in the sense that I feel we need to force the American way on every third world nation. I hear this song and think about kids at bus stops, Dad leaving for work with the hard hat in one hand and lunch in the other. I think about Mom pulling the late shift at the grocery to make a little extra for the family and Friday night football games. This is a reflection of America.

This is going to be a tough one. I’m not the biggest country music fan in the world but Willie Nelson is an exception. He has this bravado about him that I consider more rock than anything else. Perhaps it’s because he sticks it to “the man” by not paying taxes and openly smokes weed. Regardless, after my Grandfather passed, Willie and I became a little closer.

My Grandfather passed away very suddenly from a heart attack and a day later I found myself in Bakersfield, California with the rest of the immediatefamily. Through out that day we did the un pleasantry’s of funeral arrangements and eulogy writing. My poor Grandmother was still bewildered but her selfless spirit never showed pain as she consoled my Father, Aunts and Uncles. As the day became night everyone left to their respective hotels and I was left to sleep in the guest room with only my Grandmother in the house.

The house was busy with every person in driving distance stopping through to pay their condolences. At any given time there was no less than thirty people in a relatively small ranch home so when the last person left the silence was deafening. She and I sat on the couch and watched old British comedies on PBS as the time slipped passed 1 am. Looking at the clock she suggested I retire to bed and she would too after her wine. It was difficult for me to find the appropriate words, but she read my face and insisted she was fine. She would be in bed shortly.

As I layed down in bed I stared at the ceiling and tried to remember my Grandfather in a light that would be positive for the wake. He was a very abrasive person. I can think of more than one instance when he would say “I sure do love you, Goddamn it”. A colleague of his at UC Berkley once said that my Grandfather had to be the bride at every wedding and corpse at every funeral. At least that was partly accurate. Regardless, I did find the good times but that was interrupted by the sound of music from the study down the hall. It was the unmistakable sound of Willie Nelson’s classical guitar. So I got out of bed to see what was happening and found my Grandmother sitting next to the record player with a lap full of letters and pictures. She looked up, half expecting me to be there.

“I guess I wasn’t ready to look at his empty pillow.”

You know, there are a handful of moments in your life that really take your breath away. That was one of mine. I sat next to her as she shared old love letters during World War II when she was stationed in San Fransisco (she was an officer in the Navy) and he was in the Pacific. She also showed me pictures of the family from the 50’s to the late 70’s including a glorious one of my Dad with sideburns and bellbottoms. Everytime the song would end she would ask me to replay it and we would go back to remembering my Grandfather, Bill. This lasted for two bottles of wine and a sunrise.

She died a year later. I never told anyone in the family about our time together. I’ve always looked at my Grandmother as the source that smoothed out the rough wake my Grandfather made. But the time we spent together gave me the chance to know her as elegant, graceful, and strong woman with the dignity that is impossible to come by today. I do miss her and love her so.

When I found this song, “Stardust” by Willie Nelson on YouTube I made it through about ten seconds. I guess even two years later it is too soon for me to hear it. I do ask that you give it a try. It was one of B. Webster’s favorites.

“Into The White” by Cat Stevens (Yusuf) is hands down one of my favorite songs. I think the word beautiful was meant for creations like this. No matter how many times I listen, it never gets old. I even butcher it on guitar and sing but that’s only for my ears. Enjoy this one. I have for as long as I can remember.

Who doesn’t love Jim Croce? Hm? Hm? That’s what I thought. The song “Operator” will always remind me of the time I went cross country skiing with Dad and my Uncle, Brett. I was way too young to cross country ski so I ended up being the whiner of the trip. To top things off I got carsick on the way out of the park too. I actually don’t know why this song brings up that memory. Strange.

Well, that’s as depressing as I want to get. But just to balance things out I will leave you with a joke.

“What do you see when the Pillsbury Doe Boy moons you?”