Savannah, Georgia will always have a special place in my heart. It was forged years ago through countless family beach vacations, a middle school field trip where I discovered that girls where not as gross as I imagined, wild college road trips where I really discovered girls were not as gross as I imagined and finally my time stationed near there in the Army. I call it as much home as I do anywhere else and though I am not a current resident, I jump at the chance to bring anyone who hasn’t been. This past weekend I did just that and we hit a few “haunts”, even making time to get a royal sunburn at the beach. Eat it mid-October!

We started off for the five hour trek at around four in the morning so by the time we thought about breakfast we were well past the halfway mark. I am not really sure when this happened but somehow I became my parents and insisted we stop at a Cracker Barrel rather than a McDonald’s. I will admit, there is a certain charm about eating under the same roof that has a one pound Sugar Daddy for sale and more Christmas ornaments than the Whoville. I know this restaurant has had some bad publicity with their idiotic rule of not hiring anyone who is gay, but I will admit, their biscuits do make the Pillsbury Doe Boy look like he should be selling ratchet sets instead.

I get a little excited when I am traveling to some place I want to go to, especially cities of nostalgic meaning. Though I don’t recommend breaking the law by exceeding the speed limit AND trying to take a cellphone picture in reference to Back to the Future, in my defense, I saw a palm tree. We were close and by all logic, going 88mph would get us there sooner. Don’t worry, it didn’t last long. I am 3/4 of the way through Crime and Punishment. I get it. 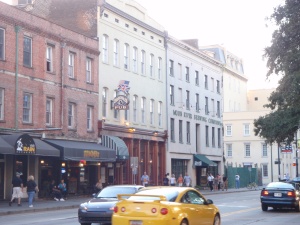 Well look at that. I got us here safe and sound without rocketing back to 1955. Driving down this street brings back so many memories, I can’t even begin to start with the “no shit, there I was” stories and honestly, I am old enough now to realize no one cares. That’s okay because just looking at the cobble streets, historical markers, memorable bars and vibrant tourists traps I have too many warm memories that I don’t mind replaying them in my own head. But this tease of a drive was short because the girlfriend had other plans than being drunk pirates like I wanted. She opted for an afternoon at the beach. I obliged.

I am saving the Tybee Island part of the trip for another part of the blog. I feel that since this is the Halloween season and I had another purpose to come to Savannah, this should take precedence over summer fun. I came back to visit a few places and boy oh boy, they did not disappoint. Not in the least.

Years ago I wrote about a business trip I took to Savannah and the incredible experience that I had at a particular restaurant. I risked looking like a complete jackass and wrote how I saw a ghost.  A full torso vaporous apparition and over the years it has grown into a well sought after story. After that happened I started to become aware that I am not the minority when it comes to spooky happenings in Savannah and this place is known as the most haunted city in America.

Moon River Brewing Company in all it’s glory. This place has been on every paranormal show imaginable and each one has come through with some very creepy footage. What is equally creepy is how all the stories are so similar. It’s not like there are dozens of independent experiences and conflicting sightings. No, just about every person interviewed had like ghostly encounters in the same locations. And one of those location is in the basement where anyone can go, but no one does.

Getting a spot in this place can be tricky but luckily for us we managed to squeeze into a nice two-top just next to the basement stairs with more than an hour to go on the “happy hour” clock. The beers here are incredible and if we didn’t have places to go and ghouls to meet, I would have just camped eating garlic fries and wit beer. But even in beer heaven, my eyes couldn’t leave the dreaded basement stairs and after a couple drinks of courage, I asked our waitress if going downstairs was allowed. She raised her eyebrows, smirked and said, “sure…if you want to”. I did. It’s why I came. The girlfriend, however, was happy to stay with the fries and beer and who could blame her?

I don’t know if all the stories are true and though the “evidence” of a short shadow creature jetting around this place are bone-chilling, I can see how the quiet and musty basement can prod the imagination. But the one thing that I reflect on now is how busy the restaurant was upstairs and I was the only one who was roaming around the famous basement that made shows like Ghost Hunters and Ghost Adventures so credible and popular. I stayed down here for quiet awhile and took pictures and not a single curious patron decided to come down. Weird. 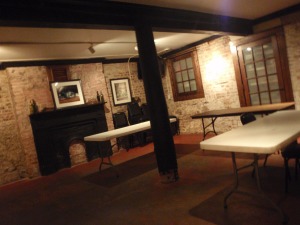 Another strange thing is when I was taking these photographs I made an effort to take straight photos but so many came out crooked. I know that’s not paranormal but I am a little afraid that I may have a leaning problem.

After enough time passed to piss off a girlfriend, I headed up for more libations and people watching, scouring the pictures for orbs, demons, pirate ghosts, thumbs, and Bigfoot. I got nothin’. Luckily, before we left I was able to talk the girlfriend into a quick tour of the basement because I had a little experiment I needed to conduct. 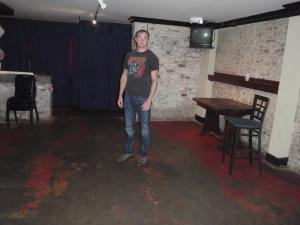 I know that I can seem a little strange and I am thankful I have someone who puts up with me. I needed to have someone take pictures of me actually in this place. I don’t know, it bugs me that I have thousands of pictures and no proof that I was actually even there. Plus, I needed to show this entity the importance of physical fitness through the power of lunges.

Though this particular lunge is wickedly improper, I think that if there is a…thing in the basement, it got the point. What’s the point, you ask? I don’t know. Ask your mom. (Sorry. You don’t have to ask her.)

But did it work? I don’t know. What do you think?

Well, Moon River Brewing Company was a lovely experience, even if we didn’t “experience” anything. But I will say the atmosphere, people, beer and garlic fries makes this place a step up from any place I would want to be. I just like knowing that wit beer can be consumed while touching the ethereal plain.To the Pirate House!

Remember how I was telling you that Savannah was a dark and creepy place? Yeah, this is similar to a lot of the store fronts and this one in particular happens to be a greeting card and collectible shop. My heart sings knowing the fact that these mannequins are probably stored close to the bathroom and scare unsuspecting grandmothers when they search for a bathroom around April. Had it not been closed, I am sure we would be proud owners of magnolia covered greeting cards. Thank you for your window fronts and also for being closed.

The Pirate House. The last time I was here I witnessed a really strange occurrence that to this day I can not explain. There is no possible way to describe the feeling when I look at this place and going inside it was even more intense. When I left this bar almost six years ago my perception of reality was skewed a bit. Not drastically changed but definitely skewed. I really wanted to get skewed again. In a non-obscene way of course.

We barely made the last call and the bartender looked super annoyed which made me even more annoyed. I didn’t come over here to get the same service as an Applebees in Paducah, Kentucky. I was in an establishment that was older than most states, has tunnels that lead to the Savannah River to shanghai unsuspecting colonials, it is IN the book Treasure Island, famous pirates died here and, most importantly, this is where I saw a ghost. If this bartender wants to be pissy I was in no mood. Much like the guy who puts on the Mickey Mouse suit at Disney World and complains about getting hit in the balls every time a kids hugs him, don’t make the dick-face when we come in at last call. It was 10:30! Don’t be in the service industry of a tourist city and be a jerk. You bag of dicks!

Wow, sorry about that. Where was I? Oh yeah, The Pirate House, established when people lived to be forty and could die from a tooth ache.

I soon got over myself and made it clear that I am glad we were there and the bartender should be performing unicycle tricks on a corner in Pakistan. I observed that the bar changed a little from my last visit and the bar-top was no longer stainless steel but wood and they downgraded the size of their television. Other than that, it was like being right back in 2006. I peered at the corner where I watched some…thing race down phantom stairs and block the TV some years prior. But the mood was different. Too many people. Too many noises. So I excused myself to venture around the now empty restaurant.

You have to admit, even without the countless witnesses of ghostly accounts and the dark history of this place, it does look creepy, eh? I don’t know if it’s the low ceilings or the constant musty breeze but it is impossible to not have a feeling that unless you are carrying dinner rolls and menus, you probably shouldn’t be there. The human brain is a quirky thing but it does let you know that something happened in there. Think I am crazy? You wouldn’t be the first.

Well soon it was time to head out but the cool thing about Savannah (besides the three million other things) is you can get your beers to go. That is right, there is no open container law in this town so we got a couple of Ghost Ales and sat outside for a bit and man, it’s even macabre on the outside!

Well, it was getting late and though walking down River Street drinking Wet Willies’ Mind Erasers and brawling with frat kids sounded fun, I am old and it was time to head back to the room and look through pictures. Those days are long past. Today, I am about craft beer, fine food and folklore. I am an adult. Haven’t you read this blog? (har har har)