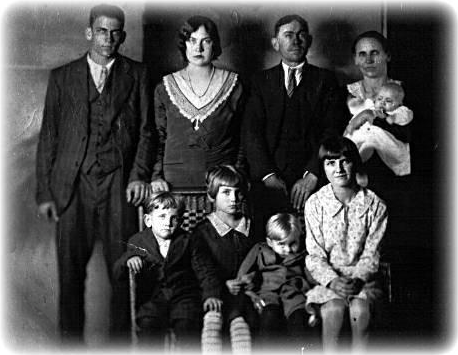 Hey! So, uh, September happened. How about that? I started this “Spook Show” and then got sidelined with work trips for half the month. Well, I am back and for the rest of this Halloween season I promise not to disappear again. To be honest, I had planned on this happening so fear not, this ride has only just begun.

Today we start the “Spooky North Carolina” series with a doozy and to my shock, right next to where I currently reside! You will see as the month of October progresses we will travel to many states, not just North Carolina (even though that is the name of the series) so when I learned of this being right up the road, it HAD to be the first one of the Halloween season.

In 1929, one of the country’s most profound tragedies happened in Stokes County, North Carolina about ten miles or so away from where yours truly lives. On Christmas morning the Lawson family were gathered together celebrating the day when the father, Charlie Lawson who was a wealthy tobacco farmer, shot and bludgeoned his wife and six kids excluding the oldest son. He had sent him on an errand into town earlier in the afternoon. The crime was brutal and without logic or reason to the locals. In the report, the wife was shot at pointblank range along with his oldest daughter while the young children were bludgeoned to death with a club. All their bodies were placed in the barn with their arms crossed and stones under their heads. When the gravity of what Charlie Lawson had done sank in he turned the rifle on himself. Those who found him say he had worn a circled path on the ground from pacing. 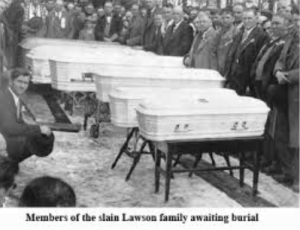 When news broke about what had happened it became a national story that attracted thousands to the little county. The massacre shocked and horrified the country but also fascinated as many. How could such a well-respected farmer slaughter his entire family? It had to be premeditated otherwise why would he spare his oldest son? And the fact it was on Christmas day only added to the sadness of the atrocious crime.

There are a couple of theories to why Charles Lawson murdered his family. One theory was that Charlie suffered head trauma from a work accident leaving him with terrible chronic headaches. Much like other cases of temporal lobe lesions or brain damage, he suffered from rage which ultimately led to the murders of seven and his suicide.

The other theory, and far more sinister, was that Charlie had been molesting his oldest daughter and impregnated her. Not wanting to live with the shame he decided to end everything before the community found out.

So, why does this make the “Spooky NC” list? Well, just like any unanswered event like the Amityville Horror, the locals claim to hear children laughing and playing in the woods at night near the Lawson farm. Most of the locals aren’t very willing to talk about the history of these events and get really evasive when asked about any strange occurrences since. Maybe they didn’t like my shirt or perhaps I am just another dumb city dweller who is there to trespass and make mischief? You never know what idiots preceded your visit to make the local people interrupt your questions with, “Are ya’ll ever gonna buy something’?”. I guess you can’t blame them.

In the video we travel to a bridge which was made from the floor boards of Lawson house that was dismantled after too many trespassers made it impossible for the land owner to keep privacy. After that, and with a whole lot of trial and error, we found the mass grave of the Lawson family. It is said the reason so many ghost sightings happen there is because of the way they were all buried together. I guess it would be pretty unrestful to be under with the dude who put you there.

Regardless of whether or not paranormal happenings are present today, it is still a real shocker to find out one of the worst crimes occurred right down the street from your house. Even if it did happen nearly one hundred years before.