I would love to see the Heenes have a reality show. True they exploited their kids in a ridiculous plot that had the world, me included, praying the kid would be okay but if you go to any child beauty pageant or talent agency you’ll see some real scary parents. I’m just saying, I would change my schedule around if the Heenes had a show. And most likely buy seasonal DVD’s. If Mike Vick can come back for doing the unthinkable, I believe we have it in our hearts to forgive the Heenes and watch their insanity from the safety of our couch. I mean, the kid’s name is Falcon and he blew chunks on national TV. This is gold people! And if Mr. Heene would say “one point twenty one gigawatts!” I would be a loyal fan for life.

Jon and Kate Gosselin is a perfect example of what money and fame will do to your soul if you let it. It’s not fair for me to say that they love their thrust to stardom more than their kids but it doesn’t look good for them. I have been watching the show since it started and while my manhood just took a hit for admitting that, I really did like it. It was a “feel-good” show that reminded us that there is still family value programing  in television. Well, when the bucks started flowing, Kate started jet-setting across the country on book tours and Jon changed from mild-mannered prep to biker-douche, the show’s premise took a backseat. And that premise is their beautiful kids. I can only imagine how confused all those kids are right now. 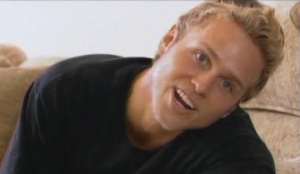 What the fuck is The Hills? Is it a reality show or are they actors? I breeze past MTV while channel surfing because if you stay on that channel too long you risk getting what doctors call hippodropadumpess where you will actually shit your own hippocampus. It’s true. Look it up. Anyway, my friend is a huge Hills fan and I just don’t get it. But it’s safe to say that the dickhole above needs to be killed off the show. So, I kind of hope it is a reality show after all. 🙂

I’m going to say it. If I disappear than you will know they got me. Oprah sucks. Now before the men in black take me away for slandering one of the top people who control the world let me explain. My mom is a big fan of hers. Anything that Oprah says is good, Mom will buy. Anything that Oprah says is bad, Mom will denounce. There is such a large demographic that her show reaches Oprah has the ability to control the masses. She controls my mother. Hopefully she hasn’t already gotten to you.

When I asked Mom why she was such an Oprah follower she told me that Oprah was very personable and was easy to identify with. I had no idea that she can identify with a multi billionaire that has a yacht the size of the USS Roosevelt and has a staff that contractually obligated to secrecy. In that case, Mom must think I am from the planet Plee Blip.

I have a theory that Oprah eats children. Oops, I have said too much. They are definitely coming for me now. 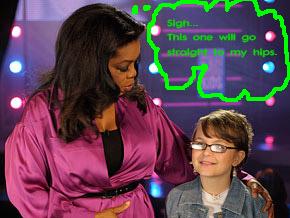 I think I need to read more books.

Edit: Just finished watching “Brothers and Sisters” on ABC.  It’s a good thing that I don’t believe in guns (as a non hunter) because I would have shot myself. Most likely blown off Rupert. That show probably gave me diabetes. There is a point when ‘cute’ is ‘sick’. This show…fuck. There are no words. Ok, there are. But I can’t say that infront of the ladies.